STATERECORDS.ORG IS A PRIVATELY OWNED WEBSITE THAT IS NOT OWNED OR OPERATED BY ANY STATE GOVERNMENT AGENCY.
Search Public Records
Court Records
Court Structures

Court Structures in the United States 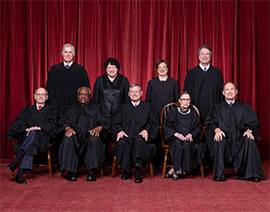 For the first time since 1869, there are those in congress that want to expand the seats of the SCOTUS. Currently, there are 9 seats on the court, though this may change in the coming years.Photo courtesy of Collection of the SCOTUS

The justice system in the United States adhere to a hierarchy within their respective jurisdictions. This follows, in many ways, the relationship between the state governments and the federal government. While federal courts typically hold more power to influence law and pass judgement on a nationwide scale, state courts deal with more local problems and can, in some cases, overrule federal mandates. Notable instances of when states can overrule the federal court system and law is when several states made marijuana legal despite it being illegal on a federal level, and when a presidential pardon is inapplicable for state level criminal charges.

Because of this complex relationship, and the higher powers granted for some courts in the country, it is important for the courts of both the federal government and state governments to have an established hierarchy. Every state in the Union has their own court structure that is used to establish which rulings and sentences carry the most weight, and which directions any appellate action will take.

Understanding the court structure can also help when attempting to locate federal criminal court records, or even statewide court records. This can even help determine what a court record will cost. Court structures are a roadmap for those currently engaging in legal proceedings, or those who are interested in learning more about a case. Regardless, they are an important pieces of information that is widely available.

Though while each court structure is unique in it's own way, there are several consistencies to consider that may make finding a court record or understanding the legal system easier. Here are the most common courts and levels in the American legal system.

The Supreme Court in Washington D.C. is the highest court in the United States. Granted its power by Article III of the U.S. Constitution, this court is authorized to pass laws to establish a system of lower courts, which it does whenever the need arises. Currently there are 94 district level courts and 13 courts of appeals in the Supreme Court's jurisdiction.

The US Supreme Court (SCOTUS) has a very narrow original jurisdiction. Disputes between states and disputes between ambassadors are the only time a case will appear before the supreme court before any other court. However, the caseload of the SCOTUS is larger than this because they have the ultimate appellate jurisdiction over all federal and state court cases, and the power of judicial review, which allows the SCOTUS to rule on the constitutional validity of a piece of legislation.

This means that in several points in the history of the country, due to the judgement of the supreme justices, laws that were democratically installed have been overturned, or have been deemed unconstitutional. Such cases include the 1963 case of Gideon v. Wainwright, which established that in order to have a fair and speedy trial attorneys must be provided to defendants who cannot afford them, and 2015's Obergefell v. Hodges, which held that same-sex couples had a fundamental right to be married. The latter forced several states to allow and validate marriages between same sex couples, and is an example where the federal court held jurisdiction over a state based decision.

State Supreme Courts often act as the highest courts in their state, but this is not always the case. In Oklahoma, for example, the Supreme Court and the Court of Criminal Appeals hold equal power in the state over different types of court cases. In New York, the Supreme Court is actually the second highest court in the land, and while it can hold original jurisdiction over extreme felonies, misdemeanors, and divorces, the court itself has an appellate division which in turn answers to the New York Court of Appeals, which is the highest court in the state. Texas also has two top courts. The state employs both a Supreme Court (which deals with civil case appeals) and a Court of Criminal Appeals (which deals with criminal case appeals).

Generally speaking, the Supreme Court is the final stop when appealing up the court structure, with rare exceptions designating two different courts for criminal and civil cases. The supreme court of each state typically functions as the final place to appeal a case before having to approach the most difficult task of appealing to the federal court of appeals.

The courts of appeals are the designated court for appeals from prior judgements. They are occasionally on par or higher that state supreme courts, and deal mainly with criminal cases. They can set legal precedent, in large regions of the country, and because of this are considered some of the most powerful courts in the United States.

Court of Appeals in the Federal Circuit do not hold trials. They exclusively exist to review previous decisions from lower courts in an effort to make sure a constitutionally sound. This is a lesser version of the decisions made by the United States Supreme Court's Judicial Review. Yet since the SCOTUS review fewer than 2% of the 7,000 to 8,000 cases filed with it every year, the Courts of Appeals are often the final decision makers. The most influential of these courts is the United States Court of Appeals for the Ninth Circuit, since it covers over 20% of the population of the country.

These exceptions are not rare, but they are in the strong minority. Typically, it is safe to think of the a state court of appeals as the last stop before the supreme court when attempting to have a case reviewed.

They go by many names, but typically every state will have County Courts, Municipal Courts, and Specialized Courts. The latter can include courts that handle claims, bankruptcy, smaller municipalities like towns and villages, and family-related legal issues. Many states will have specially named courts of their own, such as Superior Courts, or Justice of the Peace Courts.

These courts are often the first place a trial or hearing will take place after conviction of crime, or civil issue arises. They are common in less urbanized areas where the population doesn't make such hearings or trials unwieldy or drive up the caseload. They are present in many states, but not all.

These are very common courts that also serve as a first line trial and hearing court for criminal and civil cases.

In Michigan, the Municipal Courts handle cases of tort, contract, real property valued at up to $3,000, small claims of up to $600, preliminary hearing, misdemeanor criminal cases, and traffic violations.

In Massachusetts, there are no county courts. Instead Boston's Municipal Court Department and their District Court Department serve as the jury trial courts for the state's municipalities and the city of Boston. Together, they share the same responsibilities for their jurisdictions to handle, small claims, tort, real property (up to $25,000), civil matters, and criminal trials involving felonies, misdemeanors, preliminary hearings, and traffic/ordinance violations.

Further still, the Rhode Island Municipal Courts are responsible only for ordinance violations such as parking tickets (not to be confused with The Rhode Island Traffic Tribunal which handles cases for traffic infractions.)

Generally speaking, these courts are the first courts where an infraction, crime, or civil case is heard before moving to higher courts, if needed.

There are many state exclusive courts that have a myriad reasons for existence. Sometimes these courts are present because of leftover laws from when America was a new country, such as The Pennsylvania Commonwealth Court which hears appeals from the Pennsylvania Court of Common Pleas, and before proceeding to the Pennsylvania Supreme Court. Sometimes, they represent a particular problem that the state faces that lawmakers felt needed special attention, like The Oklahoma Court of Tax Review which hears issues of administrative agency, or the Nebraska Worker's Compensation Court, which hears issues of the same nature. Sometimes they deal with a specific kind of citizen, like Louisiana's Mayor Court, where the mayor holds hearings over traffic violations, Juvenile Court, where criminals who are under the age of 18 are tried, or Colorado's Water Court, which hears matters of property damage to the related. Most states have specialized courts of this nature, and these courts are very committed and knowledgeable in their given caseload.

The United States Court system is labyrinthian at times, but it adheres to the idea that everyone in the country is different, and deserving of a fair trial for the issues that matter to them. Structures formed around this idea, and, outside of the federal court system that caters to the country as a whole, function to best serve the people of a given area.

Understanding these court systems can help those going through litigation, or those that are seeking to instigate legal action. In turn, knowing the best path to take while performing these actions can help make citizens more knowledgeable of the system as a whole, providing for a more free, open, and fair society for everyone living in the United States.