STATERECORDS.ORG IS A PRIVATELY OWNED WEBSITE THAT IS NOT OWNED OR OPERATED BY ANY STATE GOVERNMENT AGENCY.
Search Public Records
Criminal Records
DWI

WHAT IS A DWI? 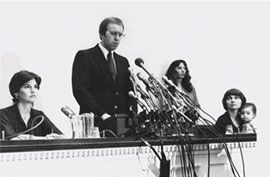 HOW DO POLICE TEST FOR DWIS

A DWI is generally defined as the operation of motorized heavy machinery while under the influence of a restricted substance, which can include alcohol, drugs, or any other consumable that impair judgement, reaction, or motor skills. When DWIs became an offense, there was no definite way to determine a person’s alcohol consumption. To this end, it was up to the judgement of the officer on the scene to determine if a person was capable of driving. Since determination was left entirely to the officer, this method was left open to opinion and error. Solutions came with time, and the first was the implementation of an early breathalyzer called the drunkometer. Further improvement on this technology eventually led to the modern day breathalyzer, which determines a person's blood alcohol level - or BAC - through infrared spectroscopy.

During a traffic stop, police are trained to be aware of multiple different factors in order to determine if a person is intoxicated. Most traffic stops occur for unrelated driving infractions such as speeding, broken equipment, erratic driving behavior, swerving, or drifting. Initial suspicions of a DWI usually begin when a driver’s smells of alcohol, though law enforcement officers are usually obligated to perform multiple tests to determine intoxication. If the officer still has suspicions after a brief verbal exchange, they will perform field sobriety tests, which can include testing for ocular focus and dilation, the ability to walk in a straight line, and the ability to recite the alphabet. These tests are used to determine reaction time, lack of coordination, and the ability of the person’s body to react to stimuli, such as light. If there is still reasonable suspicion at this point, the officer will likely administer a breathalyzer. If the breathalyzer yields a reading of .08 BAC or higher, then the officer is legally obligated to apprehend the driver.

If a driver is determined to be intoxicated to the point they are not able to operate a vehicle, they are usually placed under arrest. Their vehicle is impounded, and the offender is taken to a station for further testing. Once at a police or sheriff station, the officer will administer additional tests to determine BAC, and these tests are also admissible in court. These tests are usually an additional breath test, a blood test, or a urine test. Following these tests, some paperwork and processing, the offender will be placed in custody until the effect of the alcohol completely wears off.

HOW DOES BAC AFFECT DWIS?

While driving, a BAC of .08 is considered to be the level at which a person is no longer able to safely operate a vehicle. Most jurisdictions have laws that further punish people with higher blood alcohol contents, typically starting at .15 BAC. .15 is where most jurisdictions increase fines and other punishments, and define the act as “reckless,” in addition to DWI. These additional penalties vary, but generally include more time in alcohol intake awareness classes, and under suspended driving privileges. Though this is not the only circumstance in which additional penalties apply. If someone who is below the drinking age is caught with any alcohol content, they will face severe punishments on two counts: a DWI and underage drinking.

Driver’s have the an option to refuse the breath test at a traffic stop, but in most cases this allows the officer to perform an arrest anyway. In addition, further, more severe penalties may apply.

Penalties for driving while intoxicated can vary largely from area to area, but nearly every jurisdiction provides a “first time offender” penalty level which is lighter than further punishment levels. When a driver is caught with a BAC of between .08 and .14 BAC, did not cause any harm or damage, and had no one else in the vehicle at the time,they will be charged with a standard DWI which is only altered by additional offenses. First time convictions carry substantial penalties, but in comparison to further DWI offenses are quite light. They include fines, community service time, drug and alcohol abuse assessment courses, and a period of restricted driving privileges. First time offenders with a BAC below .15 will likely not see jail time, even if the law notes this is a possible punishment. Courts typically punish first time offenders lightly in an effort to show them the potential for serious punishments to come if they continue to break this law without treating one time offenders with too harsh a punishment.

It is worth noting that Canada, one of the most visited neighbors of the United States, bans driver’s with a recent DWI from their country for a period of up to 10 years. There are methods for getting around this ban, but this is ultimately determined by Canadian Authorities. Certain reasons for entering the county, such as attending to a work function or a familial reason, require an application for entry.

Second time convictions are usually much worse, as the offender has proven they are willing to commit a DWI after knowing the consequences. They include nearly double the fines, rehab time, community service time, and restricted driver’s license time. Most importantly, second time offenders will likely face time in prison.Third time offenders typically face worse punishments, with each additional punishment increasing until reaching a “multiple” category of DWI.

The biggest difference between early DWIs and later instances is that repeat DWIs eventually move from being misdemeanors to being felonies. Felonies are typically much worse in terms of punishments, and can warrant fines of up to $10,000 and jail time of multiple years in some cases. 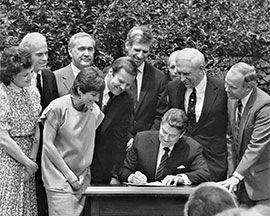 President Ronald Reagan signs legislation to change the national drinking age from 18 to 21.

As the number of DWIs increase, so does the likelihood of the offense being upgraded from a misdemeanor to a felony. Felonies are much worse than misdemeanors, and carry heavy punishments, sometimes including fines of $10,000 and jail time of multiple years.

In most cases, continued violation of DWI laws will result in a permanent ban from operating motor vehicles in addition to any normal fines, jail time, or restrictions. Jail time becomes mandatory at a certain point, and fines can reach up to $100,000 in some cases. When an offender commits enough consecutive DWIs, they will eventually be charged and punished in the same way, though higher tiers of DWI will usually result in long enough jail time or restrictions that performing an additional DWI would be difficult. This limit varies largely from state to state; some carry at least 10 DWI categories before reaching the top. Penalties of this variety often result in the confiscation of the perpetrator’s vehicle, decades in prison, and repeated, large fines.

Besides repeat offenses, some other factors can enhance DWI punishments. The most common is having an underaged person in the vehicle at the time of a DWI. In this case, most laws will define an underage person as someone either 16 or 17 years of age or younger. If a person of these ages or younger if found in the car during a DWI incident, punishments are increased to about that of a second time DWI offense, but in some cases can go higher.

Another circumstance is when a person under the influence harms or damages property while operating a vehicle. Typically this automatically upgrades the DWI to a felony, especially if someone was killed as result. Jail time is almost always mandatory. This charge is usually applied in addition to charges such as 3rd degree murder or manslaughter.

Certain states have unique punishments for DWIs. For example, Ohio requires repeat DWI offenders to put a “scarlet letter” license plate on their vehicle. The plate is of a unique color, and is intended to shame the offender publicly. Georgia and Minnesota also require an alternate license plate after a DWI conviction.