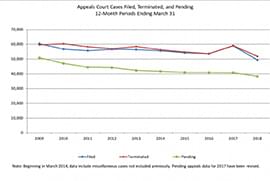 Caseloads in the United States have been dropping since 2006, and are now at an a 10 year low. Graph courtesy of UScourts.gov.

The Court System of the United States handle a myriad trials, hearing, judgements, and findings. The number of incoming cases in 2006 reached an all time high of over 100 million, meaning that for every three americans, there was one new criminal, civil, or other type of case or hearing entered into the legal system. While these numbers have dropped significantly, over the last 10 years, The United States remains one of the world’s leaders in number of cases entered, in progress, or closed every year.

Courts in the United States handle a large variety disputes. When a citizen is in need of governmental help, the courts’ function is to provide an unbiased arbiter to hear both sides, look at evidence, and make a decision deemed to be fair. When a contractor fails to complete a job but still collects payment, the aggrieved party can take that contractor to small claims court to demand his money back. When a citizen is apprehended for suspected crimes by state police, the government opens prosecution against that citizen if there is enough evidence to convince a jury and convict the suspect of their alleged crime. When one company believes there have been unfair bias or practices from a competing company, they can open a lawsuit to make up for the loss of money that came as a result of those unfair practices. Even two people who are married will need to attend divorce court to divide holdings fairily in the presence of an arbiter of judge.

The sheer vastness of the court system is only rivaled by the number of different types of disputes that need closure and arbitration. So when looking for a court record, it is advised to know which type of court records is needed.

Criminal Court is specifically designed to prosecute and punish those believed to have committed a crime. These alleged criminals are almost always prosecuted by the state, as they are the ones that have been offended by having their law breached. The state will levy evidence, argument, and testimony in an effort to convince a jury. (during a jury trial, common for felonies) or a judge (in a criminal hearing, common for misdemeanors and violations/infractions). The defense, meanwhile, is appointed an attorney in the event they cannot afford one, and must show that they either did not commit the crime, or that there were extenuating circumstances or some mitigating factor (temporary insanity, provocation, youth, or emotional distress). In this way, the criminal justice system of the United States attempts to find the truth behind alleged offenses, and prosecute those that “without a shadow of a doubt” are guilty of their crimes.

The person responsible for filing suit against an alleged criminal is known as the District Attorney (DA), though the title of this office can vary depending on the jurisdiction. For example, the County of St. Louis in Missouri calls their chief prosecutor a prosecuting attorney. They represent the state, county, or city in matters of criminal prosecution. Their propose is to determine if there is sufficient evidence to prosecute an alleged criminal, and file a suit against them if they believe there is enough evidence to convict. Filings for criminal defendants are on a downturn since 2016, when the overall number of new criminal filings fell 5 percent down to 75,861 in 2017.

Criminal records are typically found in courts, law enforcement agencies, or via background checks through the local, municipal, city, county, or state government. Visit the website of the area in question to begin your search into criminal records, or use websites like StateRecords.org to simplify the search.

While these cases take place in court, they are not typically about breaking a criminal law. Civil cases are typically about private citizens or organizational bodies like companies that sue each other for a variety of reasons. These reasons almost always are related to seeking reparation for unfair acts or business practices.

Civil Court has a wide variety of uses, and in some cases there is crossover with criminal courts.

Civil Court cases are largely about assigning blame, or making sure the wronged are properly compensated. They differ from criminal cases because they handle more matter of opinion rather than cold, hard evidence and facts. Because of this, they are far more common than even criminal cases, and many can go unresolved. 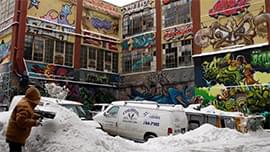 A New York landlord destroyed graffiti murals when tearing down his building to make way for high rise apartments. He now owes close to $7 million to the artists. Photo courtesy of Wikimedia.

When a couple decides to annul a marriage or get divorced, they must consult legal counsel to make the decision final. Similar to when the couple signed marriage papers or marriage records, they must again agree upon divorce papers and terms before finalizing the divorce.

In most cases, a divorce must be initiated at a supreme court, though in some cases, district court or family court can help to initiate the process.

Divorce law is typically considered quite complicated, and hiring a lawyer advisable. In order to start a divorce case, you must establish which municipality the hearing must take place in. You must also establish sufficient grounds for the divorce. Some examples of grounds are:

Both State-based and Federal Bankruptcy Courts help to serve those who have lost control of their financial situations in the United States. They are created under Article 1 of the United States Constitution. The current system for bankruptcy courts went into effect of 1984.

Each of the 94 federal judicial districts hold original jurisdiction over matters of bankruptcy. Many times, however, these courts refer these cases to local bankruptcy courts. The vast majority of all proceedings in bankruptcy court are held before a bankruptcy judge, whose decisions can, in turn, be appealed back to the district court.

Knowing which record you need, and knowing where to find it can help save a lot of time when researching court records. It helps you know where the record is kept, and what is involved in retrieving the record. While these court records are available, sometimes they are difficult to find. If you encounter difficulty in finding these court records, sites like State Records may be able to help.